This trip was my first time traveling with a faith-based organization. While the nonprofit’s main focus is medical missions (and they’ve branched out into education and water wells), their guiding values come from their common Episcopal belief systems. This is why we stayed on a church compound, the Father of the local church arranged all the details of our visit, and the main focus of the celebration centered around a large church service on Saturday. Besides the three of us (researchers) on the trip, all had ties to the Episcopal community where they are from the US. I found them not to be so evangelical that I even noticed it was a faith-based trip at times. The long-standing relationship between the project in Haiti and the nonprofit in the US meant that most moments were focused on work that needs to get done. Both groups were already united in faith, so there wasn’t as much convincing to do on that end. I don’t know what it was like when the first three men from the church in Colorado arrived in Petit-Trou and began plotting the course of this as-of-yet 25-year journey, but now the Episcopal church in town stands a monument to hard work and rural development. Their reputation is well-known in the community, their water wells serve thousands of people, and their school children are some of the highest achieving in the country. I’m not a huge fan of faith-based work generally, because I have issues with conditional assistance to people in need; but in this case, the work really developed into a faith-based mutual mission. It was just one church strengthening another, and I’m okay with that. 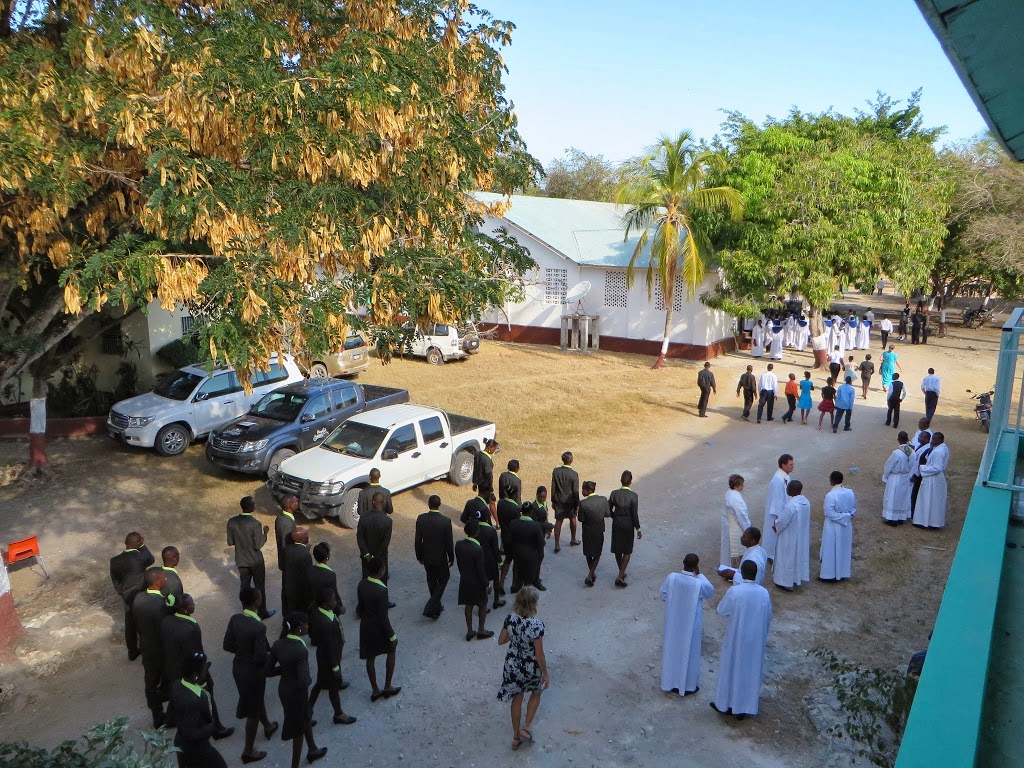 As my first faith-based inspired journey, however, I did take note of the way my traveling companions framed their experiences in terms of passages from the Bible. I think this seems obvious to most people raised in a predominantly Christian country, but as an outsider in my own land, I still marvel at aspects of “their” religion that I didn’t really understand before. So, can everyone quote all passages of the Bible and use them at the appropriate moments? Or do people just have their favorites to quote and then insert them where it feels right? Is this a silly question? Really, I don’t know. It seems, from my observation, that occasionally (like for evening prayer around dinner time or the dreaded Feeling Circle), research is conducted by someone to extract a particularly poignant passage that miraculously relates to the message they hope we learn from the day’s experiences. Other times, people seem to know them off the top of their head. I struggle with this aspect of the Bible because, as with the women’s group and how their religious leaders use those same passages of the same book to entrench community women in cycles of violence, biblical excerpts become both a coping mechanism (understanding the greater purpose of the universe?) and a weapon. I know there’s no answer to this. People will use things as they see fit, for good or evil. I get that. I think I just struggle with the relationship with religion and colonialism– the close link shared between idealism and domination, “goodness” and oppression. I’m not saying I think this group is oppressive. I’ve just never experienced the religious aspects of aid work up close in a development context (I work with a Catholic group locally that helps resettle refugees, but it’s not fieldwork, which is trying in different emotional ways). My brain is still caught up on the fine line between the good and the bad–anthropologically speaking– of missionary work in general, not of this particular group.

So, Saturday was full of festivities at the church. It might have been my first Episcopal church service, definitely my first church service in Haiti. I learned a few things. 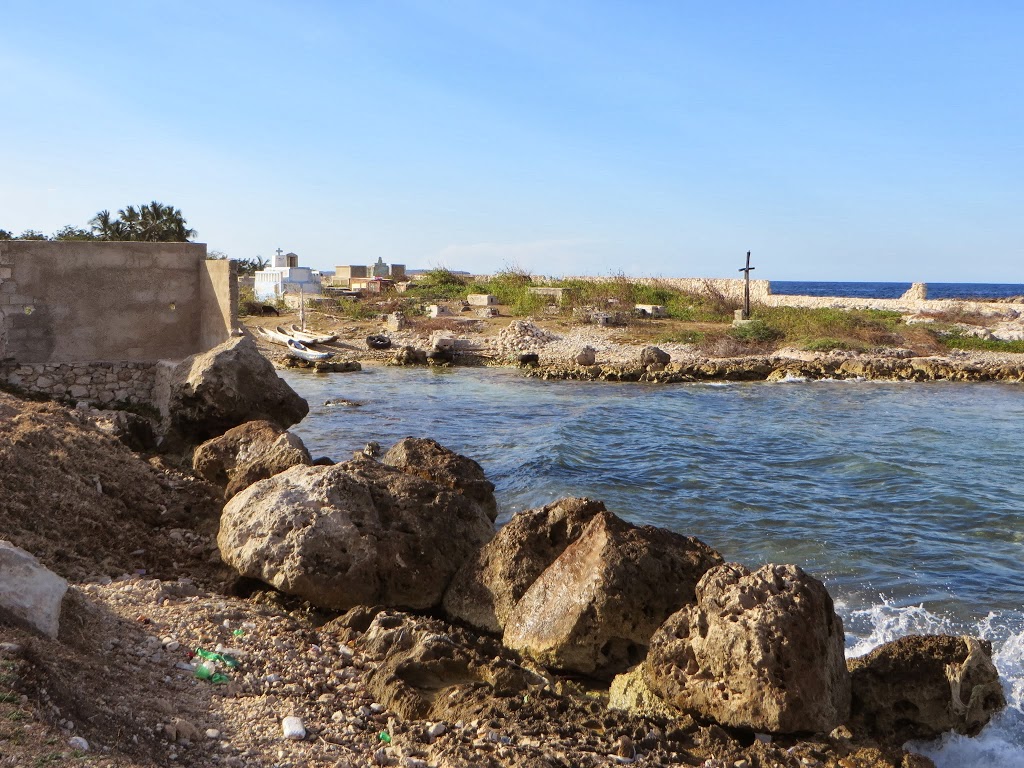 But, later that day, as a few of us waited for the women’s group to come, our translator pointed out the big black cross standing prominently in the cemetery that pushed back the ocean. Behind it, a white cross sat bleached by the hot Caribbean sun. Those, she told us, are the cross of Abel and his “wife.” Well, not his “wife” exactly. She said these crosses are in every Haitian cemetery and represent the first man and first woman ever killed (according to the Bible). I can’t find any reference to this anywhere else, so I’m not sure if this is just her interpretation. It does seem that back in the day, Haitians gave their Vodou spirits Christian aliases to protect them being wiped out through conversion. Our translator said that before zombification rituals, one must leave offerings on each of their crosses. Everyone already knows what their favorite offerings are, but leaving something Abel and his wife don’t like will lead to bad things happening. Yes, it was that vague, but I’m so intrigued! First off, I think I don’t understand zombification. I thought it happens when dead people come out of the ground and walk around and eat brains. Ah, silly Westerner. No, Zombification is a form of capital punishment that can be issued by local authorities for someone’s crime. A Vodou priest will administer some soft of concoction, the contents of which are a trade secret, and these will cause you to be functionally dead, though still alive. People must care for you (feeding and other necessities) and eventually you will recover. Blowfish toxins are rumored to be one of the components of the potion.

Also, I find this fascinating as a more obvious example of how Christianity doesn’t always translate to other countries in the ways missionaries intend. I’ve heard Christian missionaries in Japan complain that after they thought they had “properly converted” people, they’d see them at temples or shrines doing their part to cleanse karma or pay tribute to animistic deities (like the fox or michibiki jizo). But here’s a case of real blending. How do missionaries understand and conceptualize this, I wonder? Crosses in cemeteries all across the country mark the places where one can appease the spirits that control the dead in order to enact rituals of death upon the living as an actual form of justice. Hmmm. Like the Japanese, the Haitians (to generalize here) seem to readily embrace the concepts of religion as culture, rather than religion as a separate aspect of everyday life.

I’m intrigued by this mixing and mashing of religions and faith-based missions. It’s all too easy to be captivated by an island wracked by tragedy time and again– so close and yet culturally and economically so far away. I can see the allure of focusing so much effort on this culturally rich place, as evidenced by the glittering painted bus loads of white, churchy travelers entering and exiting the airport in Port-au-Prince. I need to know more. Haiti has me a little hooked…