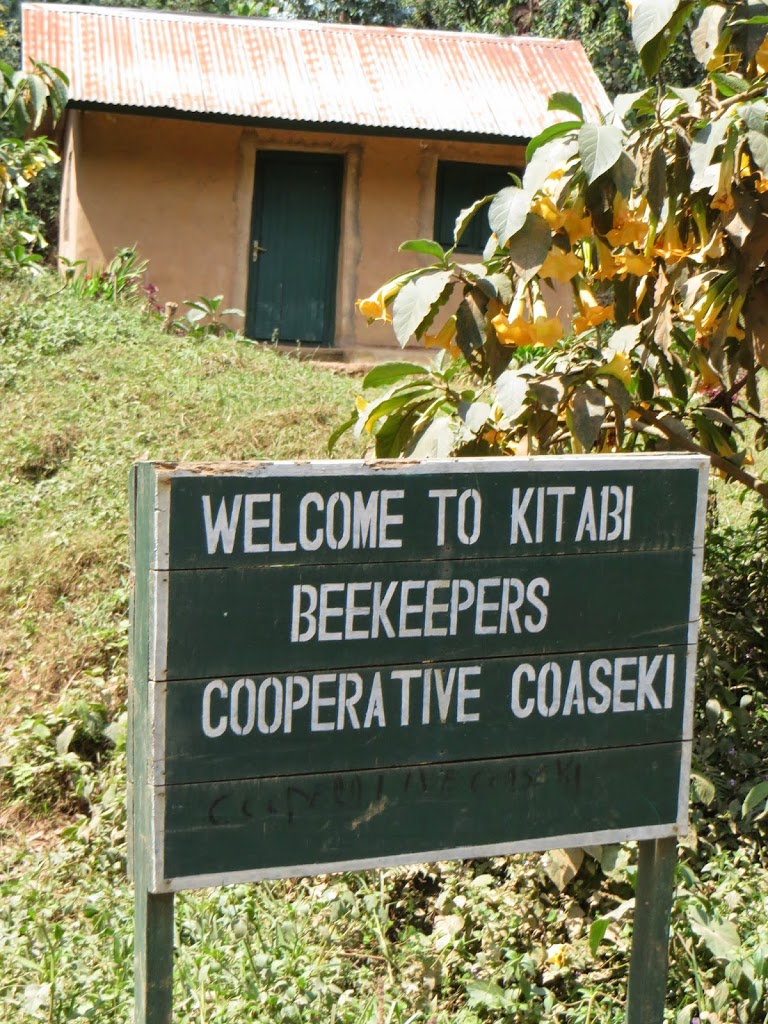 Through my Rwandan host family I had a scheduled meeting with a beekeeper who operates just outside of Kigali scheduled for the very last few days of my trip. On the way home from the canopy walk, way out in the southwestern part of the country, my friend had spotted a sign for a beekeeping cooperative and so we decided to stop. We went out into this seemingly abandoned field with an assortment of hives: langstroth, top bar, and traditional log hives, most of which were a buzz with activity (he he). We took pictures, but no one was there. 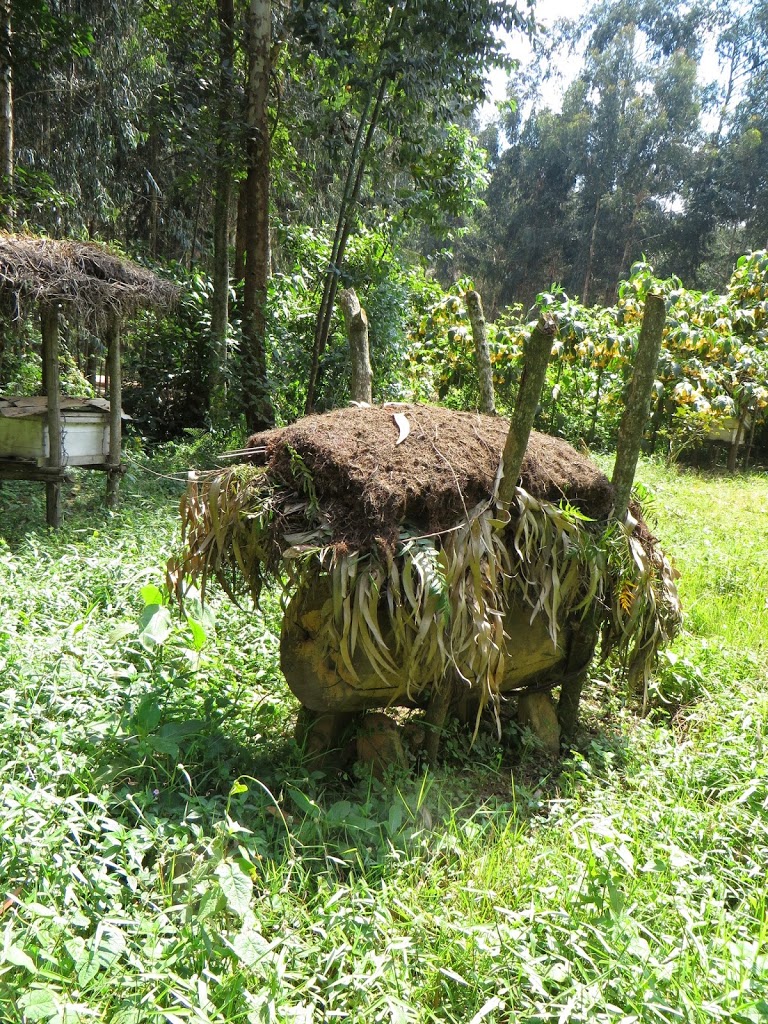 As a side note—which may affect your tender sensibilities so you can skip this paragraph—I’d like to say that I’m perfectly happy peeing in the woods when the moment moves me. My parents took me camping in places where potties were a luxury, and I’ve got no issue going “natural.” And, in Rwanda, the idea of places to pee while you’re traveling are relatively unheard of. My professor and I have toyed with the idea of writing a series of travel articles called “The places we pee” given the odd places we find ourselves as strange Americans that can’t “hold it” all day. No, seriously, all day. In Rwanda, I find that even in the most remote places there are always people walking by. There’s never really a good place or moment to squat by the side of the road. Literally every few seconds someone will walk by. It’s a very walking-centric culture here, especially way up in the middle of nowhere. So…given the seemingly abandoned beeyard and the urge to go, we ventured out a ways into the woods to take care of some travel business. How did I find a good spot amidst a bunch of active hives to display my most vulnerable bits, you ask? Well, I wandered up a foot path that seemed like it was behind all the hives and happened to glance to my left and notice a whole field of traditional log hives that blend so perfectly into the woods. I got distracted, as I do, and started to tumble down the mountain a bit. Not to worry, I caught myself, but I decided that would be a good place to mark my spot. 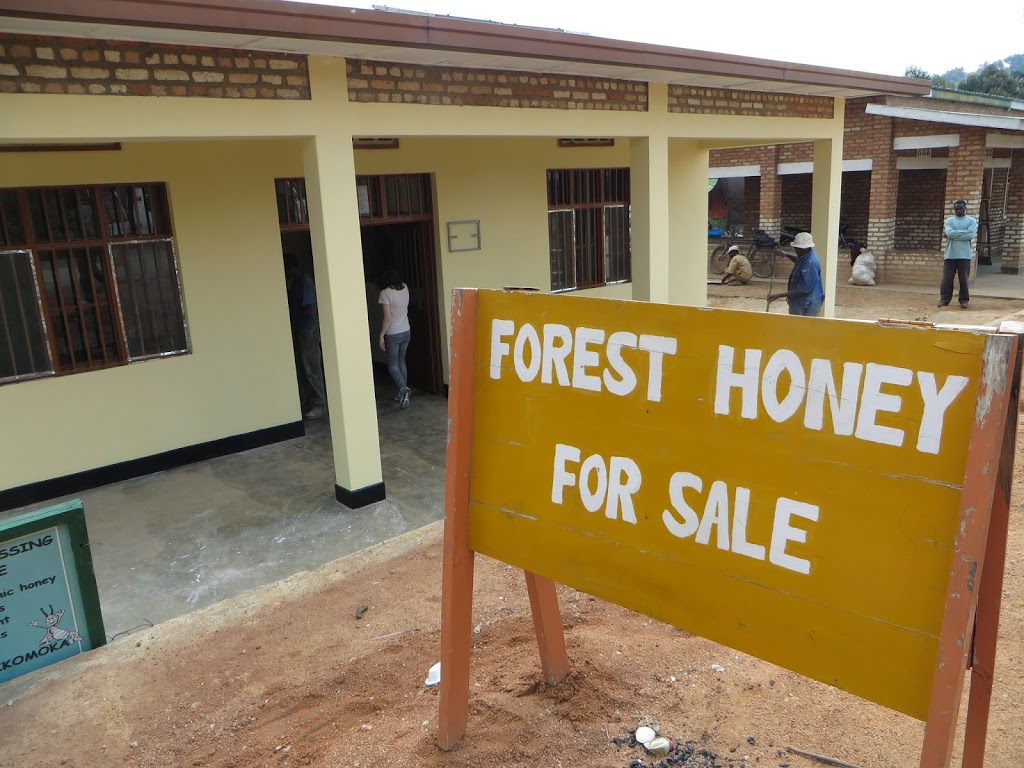 So, it turns out the beekeepers union had moved to a new USAID building up the road. We stopped at a sign that said “Forest Honey for Sale” and stepped inside. There was an extraction room with nice shiny equipment and piles and piles of honey inside. They were still painting the room and had apparently just sold off a bunch of their stock, but there were still boxes full of candles and a table full of honey to sell. A man stood to the side and didn’t say a word, but I was informed that he was the association leader. I thought maybe he didn’t speak English. In the end, it turns out he was just shy. His English was great, and he walked me through how the union came to be, how they represent over 30 local beekeepers, how another group comes with candle molds to make the candles from the wax, and how they produced 9.9 tons of honey last year using a combination of hives. The langstroths and top bars are for honey, and the traditional hives are mostly for harvesting wax for candles and making foundations for their frames. He was very proud of his group and said if I come next time, they have a tour you can take that shows you step by step the process of getting honey and packaging it for sale. If only we had more time! It takes at least half a day to trek down into the valley where the beekeepers live, since they’re not allowed to keep bees in the actual forest. 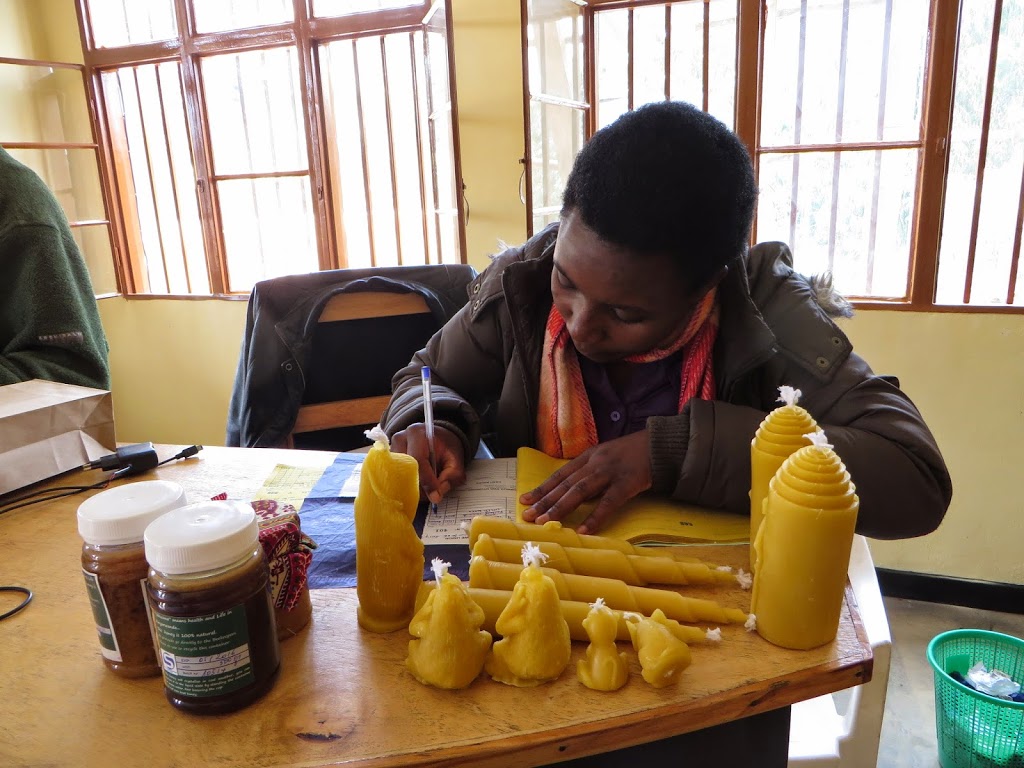 I had one more beekeeping experience with my original appointment guy on one of the very last days in Rwanda. He was 30 minutes late to our sketchy meeting at a gas station and I was really starting to think it wasn’t going to work out. Finally, just as we were about to give up, a man walks up to the car—well dressed and carrying a leather binder—and looked so purposeful that I leaned out the window and asked, “Juvenal?” He hopped in the car and we wound our way through some neighborhoods to get to his project. 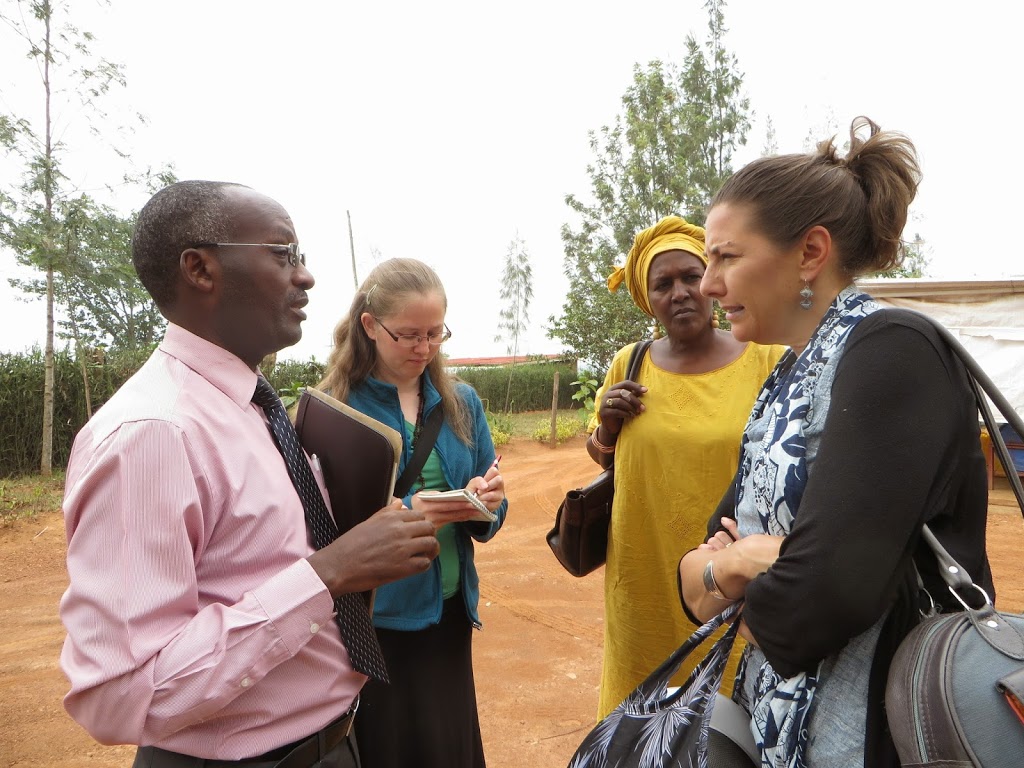 He developed a beekeeping business out of his house back before the neighborhoods were built. Eventually it got so big that he had to move out, so he built a connecting house and expanded his business. He went from just beekeeping to making liquor from honey. He also knew the value of honey production in the more rural areas of northwestern Rwanda where he was originally from. With the forests there, the honey can be extracted 3-4 times per year, but people there don’t know how to keep bees or market the product. So he stepped in, encouraged them to plant a variety of fruit trees where there was space, and helped them learn beekeeping. They operate like a cooperative, where he guarantees he will buy their honey and fruits from them each season and sell it in Kigali. The fruits become jams, wines, and juices while the honey is packaged and sold as is or as liquor. He’s not at all what I was expecting. A true entrepreneur, he had a laboratory where he tests the quality of his products with the hopes of exporting one day. Two medals hung on his wall marking his accomplishment of attaining highest quality agricultural product in Rwanda. He didn’t speak English—he was mainly Francophone—but he could understand most of what he was saying. Luckily, his young apprentice spoke English well and helped fill in the details. There are only a few hives at their plantation in the city. These are meant to teach the public that bees aren’t scary or dangerous. Interestingly, while the pesticide companies in the US try to deny that they’re doing any harm to bees and there’s no “proof” that they are responsible for the decline, in Rwanda where that propaganda doesn’t yet exist, he volunteered that it’s hard for them to expand their operations in Kigali because the farmers there use chemicals and pesticides. Those up in the North don’t have the money or experience to use chemicals while farming, and the bees never die up there. Hmmm…Something all beekeepers know and all chemical companies deny. 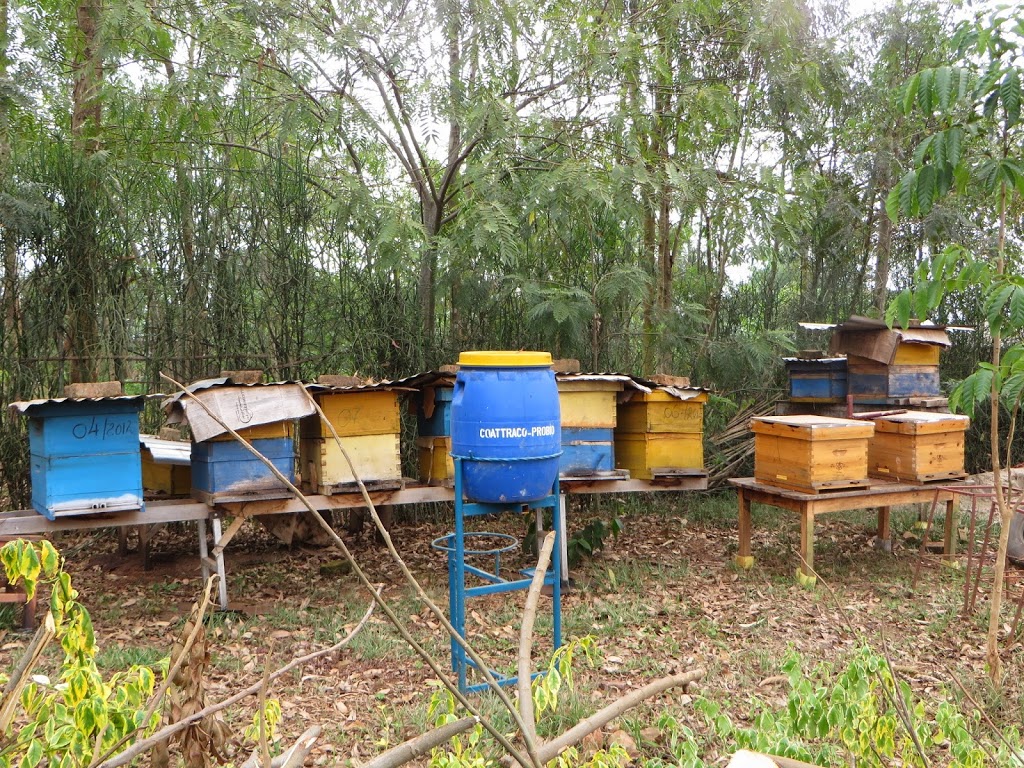 Again, if we had more time, Juvenal offered to take me way up into the mountains (probably a 3-day trip in total) to see the full operations, but I told him that would have to wait until my next visit. I suggested that we work together to write an article for a beekeeping magazine about the amazing work he’s doing, and also develop a beekeeping safari like they have in other countries. Any takers? 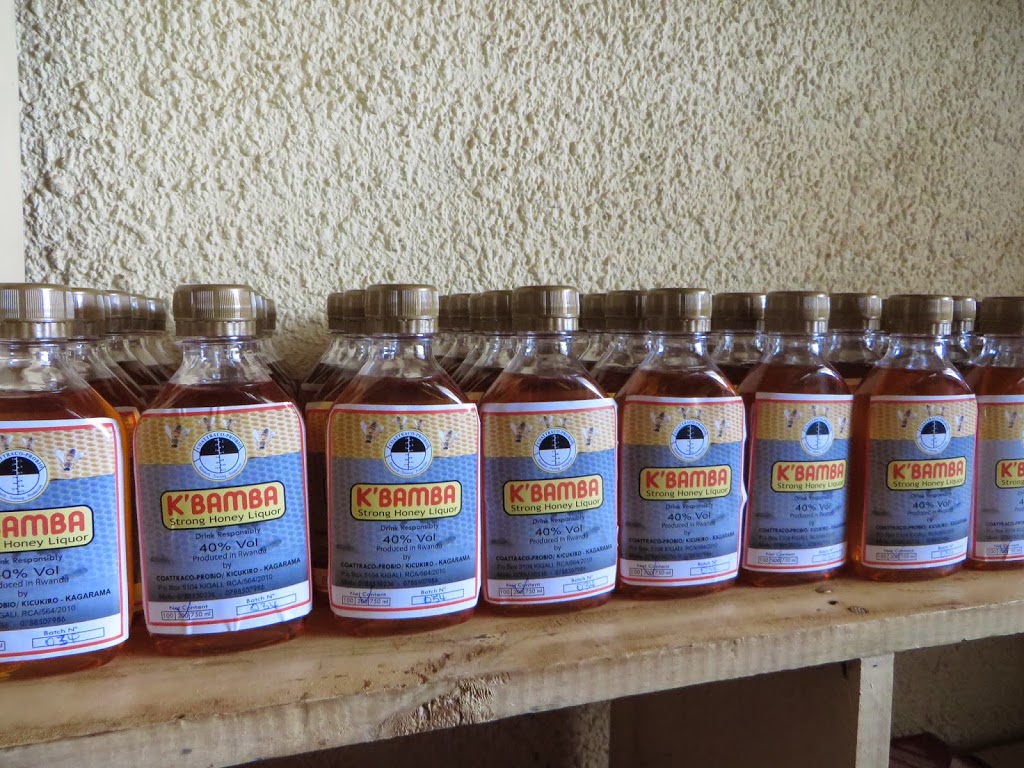 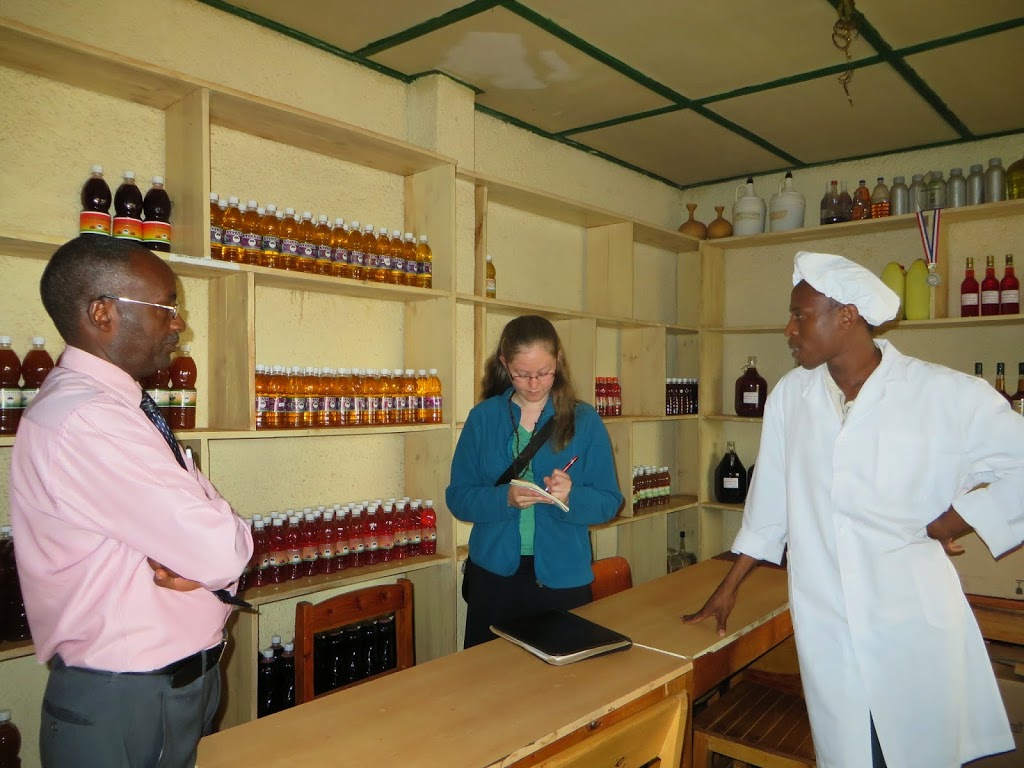 3 Replies to “Say “BUUZZZZ” for the camera!”