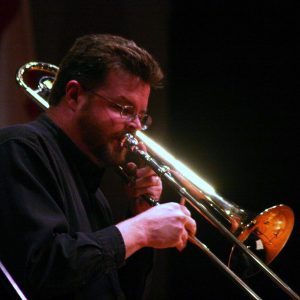 Dr. Hall has performed extensively throughout the world covering a large spectrum of styles. He has performed often with the symphony orchestras of Richmond, Virginia, Kansas City, Kansas City Chamber Orchestra, Topeka, Ann Arbor, Detroit, Tucson, and the Kansas City Lyric Opera, Virginia Opera and Arizona Opera. Dr. Hall performed as Solo Trombonist with the Fountain City Brass Band in Kansas City 2002-2004. He has also been quite involved in theater orchestra performances ranging from ballet to opera to musicals. The Arizona Theater Company cast him as on-stage trombonist for their production of "Ain't Misbehavin,'" and he has backed such notable entertainers as Natalie Cole, Ray Charles, Aretha Franklin, Maureen McGovern, Jack Jones, Vanessa Williams, Ben Vereen, The Temptations, The Four Tops, Bob Hope, Kenny Rogers, Bob Newhart, and many others.

As a chamber musician, Dr. Hall served as trombonist for the Galliard Brass Ensemble based in Ann Arbor, MI, 1995-2004, concertizing throughout the country in styles ranging from Renaissance to contemporary. In 2004 GBE was invited to give concerts on the Summer Music Festival of Harbin, China. Dr. Hall was also a member of the Kansas Brass Quintet 2000-2006. He has given many performances with the Detroit Chamber Winds and Michigan Chamber Brass. In 1991, Dr. Hall toured China with the University of Arizona Graduate Brass Quintet giving concerts, masterclasses and a featured concert at the Shanghai Civic Center.

As a jazz/commercial musician, Dr. Hall's experiences range from small group leader to big band trombonist. He played lead trombone in Frank Foster's Big Band 2008-2009 and served on the International Music Camp Jazz faculty for several years. He was a member of the Couriers, a ten-piece group based in Ann Arbor, MI and frequent guest with the Bird of Paradise Orchestra in Ann Arbor. In Michigan Dr. Hall led a quartet featuring pianist Rick Roe, bassist Paul Keller and drummer Aron Siegel. He also appeared in Detroit with Wendell Harrison, Marcus Belgrave, Walter White, Johnny Trudell, Bill Meyer and many more of Detroit's finest jazz artists. Dr. Hall also appeared regularly with salsa bands Latin Sounds in Minneapolis and the Edgar Leon Group in Detroit, and served as Staff Musician aboard the S.S. Norway, Royal Viking Sea, and Crystal Symphony. His solos took first place in the 1991 Tucson Jazz Society Competition and he is a three-time winner of the Eau Claire Jazz Festival Combo Competition.

As a studio musician, Dr. Hall has recorded several motion picture sound tracks, television and radio commercials, and compact discs ranging from symphonic orchestra and wind music to jazz, rap, ska and R&B. He has produced nine recording projects under his own name in styles ranging from early music through modern solo and trombone ensemble repertoire. Access them here. 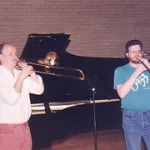 As a soloist, Dr. Hall performs a wide range of repertoire in classical and commercial settings throughout the USA, Canada and Europe.In 1994 Dr. Hall won a position on the Christian Lindberg Solo Seminar at the University of North Texas where he worked with Mr. Lindberg for seven days of intensive study in the art of solo performance.

Holding the rope at the top of this well is wife Michelle and children Rebekah, James and Wyatt. They rarely kick stones over the edge and always share the water!