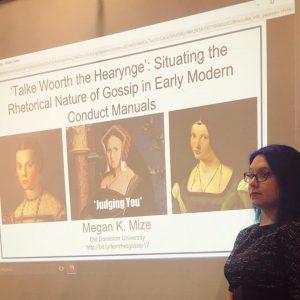 This presentation draws on Jane Donawerth’s (2012) work regarding conversational rhetorics and Jorg Bermann’s theory of “discreet indiscretion” to consider sixteenth-century conduct texts. Works such as Juan Luis Vives’ de Institutione Christiana Feminae (1523), Baldassare’s Castiglione’s The Book of the Courtier (1528), and Samuel Rowland’s “Tis Merry When Gossips Meet” (1609) construct women’s private discussions about the behavior of others, occurring typically within domestic spaces, as frivolous and dangerous; engaging in gossip threatens a woman’s reputation. In particular, this paper considers the dialogic model which dominates The Courtier as a form of gossip, as Castiglione deploys gossip as skilled speaking for the purpose of entertainment and education, while expressly admonishing women against doing the same. He thus recognizes that private storytelling about others’ behavior may influence the public sphere. At the same time, these texts acknowledge the playful nature of gossip, marking the way in which playful sharing of privileged information in private spaces and at court may have public consequences beyond women’s immediate circles. By engaging in “rhetorical archeology” to mark early constructions of gossip as a concept and its subsequent gendering, this presentation places gossip within a historical context that continues to color how women’s means of information-gathering and dissemination are viewed.